The Waveform Analysis (MATLAB / GNU Octave) toolbox classifies broad vs narrow spiking neurons based on the characteristics of extracellularly recorded action potential (AP) waveforms. This toolbox was developed and is maintained by Salva Ardid PhD.You can download the matlab code here matlab-files (zipped).

The code reproduces Figure 1 of the paper:

This toolbox is free but copyrighted by Salva Ardid, and distributed under the terms of the GNU General Public Licence as published by the Free Software Foundation (version 3). Should you find the toolbox interesting, please try it in your data. Just ensure that any publication using this code properly cites the original manuscript and links to this repository: – Ardid, Vinck, Kaping, Marquez, Everling, Womelsdorf (2015) Mapping of functionally characterized cell classes onto canonical circuit operations in primate prefrontal cortex. J. Neurosci. In Press.

The basics of the method are similar to previous attempts, but it is improved with respect to others in at least some of the following aspects: Bimodality of waveforms was enhanced and thus better discriminated by including, in addition to the peak to trough duration, the time of repolarization (Fig. 1A and 1B in the paper). We combined the two measures by means of a principal component analysis (PCA). Cell-type discrimination was then based on the first component of the PCA (Fig. 1B and 1D in the paper). Non-unimodal distribution of waveform measures are typically analyzed using the Hartigan’s Dip test. However, sensitivity in rejecting unimodality is enhanced by using its calibrated version instead, especially when a different proportion exists between the two modes, as it is the case for narrow and broad spiking cells (Fig. 1B and 1C in the paper). Unimodality rejection in Hartigan’s Dip test (as well as in its calibrated version) is sensitive to discontinuities in the distribution. For waveform measures it is then essential to previously diminish by non-linear (e.g. cubic spline) interpolation the discontinuities that are artificially introduced by the sampling frequency of waveforms. Tutorial for the Waveform Analysis Repository The main script to execute the code is main_wf_analysis.m. It first loads the original data wForig.mat that contains an structure of the same name wForig with the following fields:

A cubicly interpolated (spline) AP waveform looks like this:

A cubicly interpolated (spline) AP waveform looks like this: Interpolated AP waveform The waveformPreprocessing function is called with configuration parameters cfg: troughalign: whether an alignment for all AP waveforms at their minimum value (trough) should be done (1 by default). interpn: interpolation factor (>1; 10 by default). interptype: type of interpolation to be used (spline by default – note that no benefit would be obtained from linear interpolation, see point 3 of the Intro). normalize: whether to normalize AP waveforms in [-1,1] (1 by default). fsample: sampling frequency (40kHz in this case). In addition to the configuration parameters, the function needs the avg waveforms W and the isolationquality from the wForig structure (note that only highly isolated single cells are considered):

The waveformPreprocessing function returns the interpolated waveforms W, the new time steps of the samples X, and the computation of distinct measurements from the AP waveform (par; and parName that describes those): 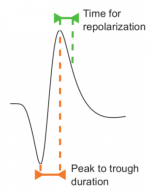 All relevant variables are then included in the wFpreprocessed structure

Separation of cell types according to AP waveforms

Only the peak to trough duration and the time for repolarization are considered, and only for highly isolated single cells. From to the two, the analysis is applied to the first component (PC1) from the principal component analysis (PCA). For comparison, the code is also applied to them individually, but I will focus here only on PC1. The waveformSeparation function the is called as follows:

The input arguments are:

The output arguments refer to:

The waveformSeparation function also creates two plots that are saved as svg files in FIGSDIR subfolder. A raw histogram of the AP waveform measure (not shown here) and a processed histogram with Gaussian fits in which the different modes (cell types) are color-coded (red and blue, respectively for narrow and broad spiking neurons):

Once each cell type is identified, the main script plots all AP waveforms, while holding the same color code introduced above for narrow and broad spiking cells:

The code of the waveform analysis calls plot2svg to save plots as svg files, which is available here:http://www.mathworks.com/matlabcentral/fileexchange/7401-scalable-vector-graphics–svg–export-of-figures.